ALL NEPHILIM ARE THE ENEMIES OF GOD

Neither word has ever meant ‘giant’ or ‘great’.  Neither word is used to designate a specific race of aliens:  anunnaki, and indeed all nephilim, are raceless because they have no planet.  The Anunnaki are Nephilim- they are ‘fallen’ entities with ‘long necks’ and lack the pigment needed to live in light.  They are primitive nocturnal creatures. Nephilim are not human-they are not ‘fallen angels’-they are demons.

They come from the deep and they can be cast back into the deep.  Where is the deep that Anunnaki dread so much they would rather be cast into a herd of swine?

Isaiah 8:22  …and they shall be driven into darkness.

1 Samuel 2:9  The wicked ones are silenced in darkness…

Mark 5:8  Jesus said unto him, Come out of the man, thou unclean spirit.

The deep they dread is deep space.

Jesus also referred to the deep as ‘outer darkness‘.

The Nephilim are NOT an advanced race.  They are ancient, but they are primitive which is why Jude refers to them as ‘brute beasts’.  They have chalk-white skin because of the absence of sunlight in deep space.  They are demons and as with all demons the Anunnaki can be cast out of our Earth and out of our Solar System.

Jesus cast them into ‘the deep’.

Matthew 22:13 …bind him hand and foot, and take him away, and cast him into outer darkness; there shall be weeping and gnashing of teeth.

Matthew 25:30  And cast ye the unprofitable servant into outer darkness; there shall be weeping and gnashing of teeth. 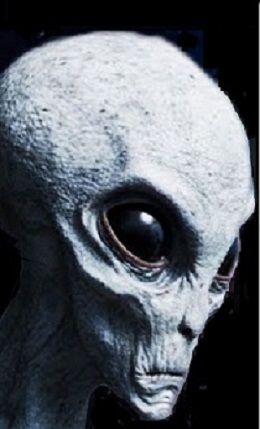 Both Jude and Peter refer to the deep that the Anunnaki and all demons come from ‘black darkness’ where they are condemned to ‘wander among stars forever’.   Jude also calls them ‘barren, sterile’ and ‘completely dead, uprooted’ (Jude 1:12).

2 Peter 2:17  These are wells without water, clouds that are carried with a tempest; to whom black darkness is reserved forever.

Jude 1:13 …foaming in their own shame; wandering among stars, to whom is reserved black darkness forever.

Job 18:18  He is driven from light into darkness, and chased from the inhabited world.

The word Nephilim has always meant ‘fallen’ and only applies to entities who abandoned Nature in pursuit of cloning and space technology. As a consequence of leaving their home planet those entities lost their planet and were forced to remain in deep space.  Nephilim were never intended to survive in deep space, but their cloning has preserved their primitive DNA.

All, unequivocally all, aliens who abduct humans have a lower order of intelligence than our own.  The technological achievements, cloning, space travel, weaponry, which they have reached after a very long existence in sterile deep space are dangerous and must be avoided.

All the inhabitants of deep space are Nephilim ‘fallen’ (rejects/discards).  Nephilim grown in laboratories on Earth don’t have stretched necks and are referred to just as Nephilim ‘fallen’ and not as Anunnaki ‘long-necked’.  Whatever their outward appearance, Nephilim are all the same thing, fallen (rejects), the length of their necks depend upon whether they were grown in zero gravity or in laboratories on Earth.

Nephilim are not ‘fallen angels’.