The Sacred Path of Migration

A supernova is an exploded Sun. A Solar System originates from the material, which is ejected out of a supernova. I use the word “explosion” as “burst of life” and not as “uncontrolled explosion of a human device.” God’s explosions are finely controlled events.

A Sun explodes and material is hurled into space. This material, or “solar ejecta” forms a colorful halo, living cloud, a luminous radiance of microorganisms, vapor and rarified gas: a Nebula. God’s invisible hands gather the material in the Nebula into planets. The exploded Sun forms a powerful vortex at the centre of the Nebula which sucks back some material and a new, smaller Sun is formed. 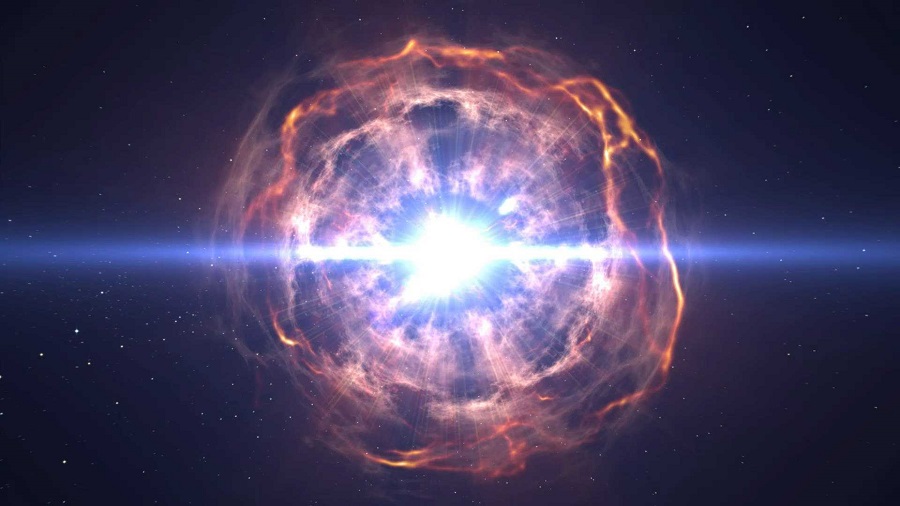 The rotating planets grow, packing the material of the Nebula into hard ice, they circle the Sun and the Nebula is transformed into a Solar System.  The planets and other bodies in the Solar System travel around the Sun in an orderly manner until the Sun requires fuel at which time the Core in the first orbit, Mercury, and the planet in the second orbit, Venus, are drawn into the Sun and transformed into energy. Simultaneously, all the other planets in the Solar System move closer to the Sun. The Moon moves in two positions and settles in the orbit previously held by Mercury. 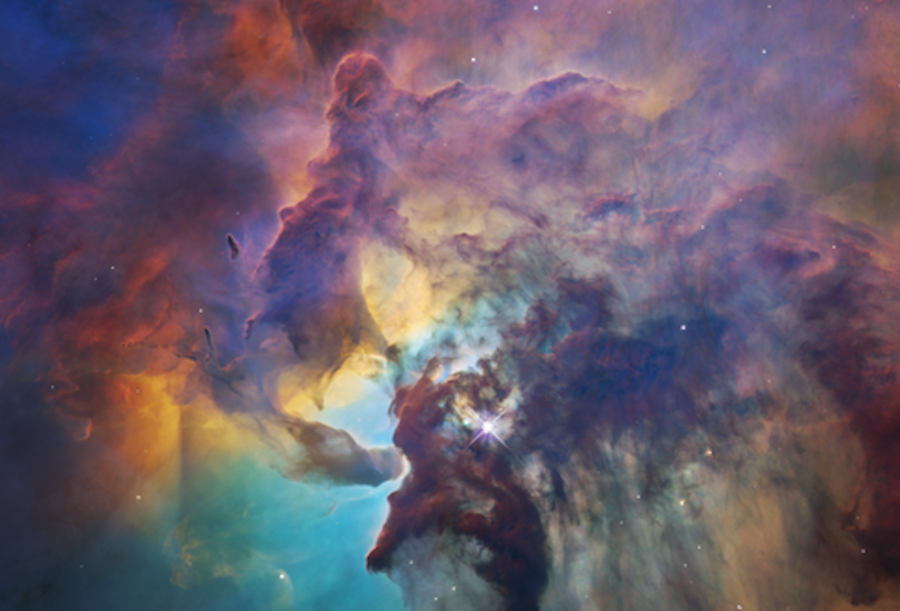 The Universe is alive, It is a living entity. All that is within the Universe is alive, and as such, the Solar System is alive. If the Universe were not alive, and the Solar System were not alive, the Earth would not be alive.  This Earth is alive. If this Earth were dead, you would not have life, for life cannot be sustained by that which is dead.  Your concepts of life and death are far removed from reality. Even your concept of reality is far removed from true reality. People need to come to a better understanding of life, death and reality.

The Solar System is alive and if the life of the Solar System were cancelled out, all life within it would be cancelled out. Every planet is a unique life supporting living entity. You can’t see life on other planets because you are contained within the unique ecosystem of this Earth.  You have to come to a whole new understanding of life, death, reality, and visibility. That which lies outside of your spectra of sound, light and density, and which you can’t hear, see or touch is also created by God. 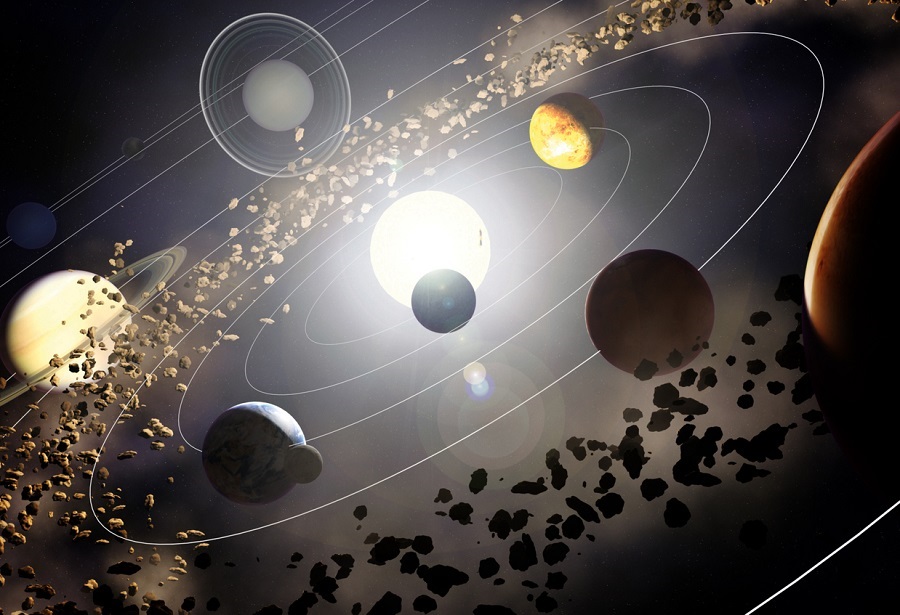 There is more to the Solar System than meets the eye; it is a complex integer teeming with life. We have come a long way from a far-off icy orbit, and we have faced many changes courageously. From the furthermost outlying orbit, Earth has transported us across the Solar System towards the Sun, and with each move closer to the Sun, God has wrought great improvements upon us.

This Earth has occupied each of the outlying orbits. This solar system supports the full array of life forms portrayed by the fossil record; we can’t see it, but it is there. Among the “fossils” (from Latin “fossilis” meaning “to be dug up”), which have been dug up by archaeologists are the bones of our pre-sapiens bodies! Life exists in all its stages in this solar system. Our instruments can’t record life on our neighboring planets because the density of that life is different from our own.

Colossians 1:16 For by Him were all things created, that are in Heaven, and that are in Earth, visible and invisible, whether they be thrones, or dominions, or principalities, or powers: all things were created by Him, and for Him.

The destruction of colossal structures such as the Mayan cities of Yucatan and the burial of Leptis Magna illustrate the chaos wrought on Earth by an unseen agent of Nature.  From the Menhirs of Carnac to the Nazca lines of Peru, enigmatic monuments bear evidence of the disappearance of prehistoric man and in sudden and unexpected cataclysmic changes.  The force, which acted on Earth, did not distinguish between temples, palaces and simple domiciles; it swallowed all structures in its path.

The ejection of a core from a planet causes the inward collapse of a planet and the subsidence of all structures on the planet’s crust. The ejected core settles very near to the body of the Mother Planet and is known to man as a lunar body, Moon, or natural satellite.  When a core is ejected the host planet caves in breaking and burying most surface structure, hence the need for a spade when you go in search of prehistoric artifacts (which are in fact our legacy from Earth, when Earth was in the orbit of Mars).

When a planet makes a transition from one orbit to another, the life forms on the planet are adapted to their new environment, closer to the Sun.  The Sun acts as an incubator.  As God’s creations draw nearer to the Sun, more heat and energy is released to them, and they are evolved to a higher, more intelligent, form.

All planets are surrounded by varying kinds and amounts of gases, and while this Earth is the only planet with an atmosphere suitable for life as you know it, the atmosphere of other planets are suited to life forms which exist on those planets.  The next transition will bring about the final stage in the growth pattern of man on this Earth.

Mercury Is Not A Planet

Mercury is an ejected core (a Moon). Mercury’s host planet, David, entered the Sun during the last Purification along with the core, which occupied the position now occupied by Mercury.

The order of the solar system was different, (it is best to reproduce the order by drawing it as it was before the last Purification) in first position and closest to the Sun was Hermes, a core (identical to Mercury); in second position (now occupied by Venus) was David a planet (identical to Venus) which occupied the position now occupied by Venus; in the third position was Venus with Mercury appearing in the sky over Venus (as does the Moon appear over Earth); in the fourth position was the Earth, home to many species including early Homo Sapiens. 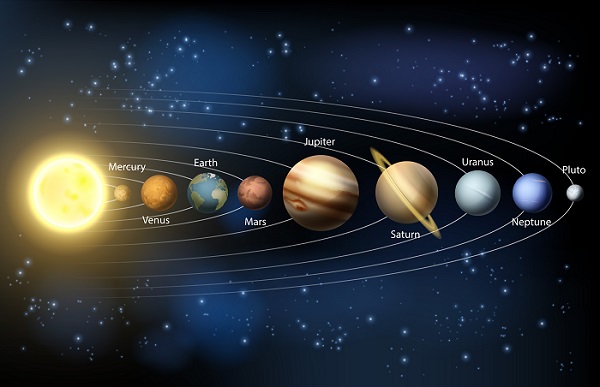 During the last Purification one core and one Planet (Hermes and David) entered the Sun and were converted into energy, not destroyed: the inhabitants of David did not enter into the Sun; the Solar System creates life and brings it to perfection; the purpose of this great work is not to use painstakingly perfected life for fuel. The gift of eternal life is granted to man in the completed form.

After the last Purification, when the Solar System settled down, Mercury occupied the first position, Venus occupied the second position and Earth occupied the third position along with our Moon (the ejected core of Venus). When Venus ejected her core and made the transition into her present orbit, her core, (now Earth’s Moon), remained here in the third orbit. Phobos and Deimos were ejected from Earth during her term as Mars, nano seconds before she made her transition into this orbit.

The Moon: an ejected Core of a planet.

It is incorrect to think of all craters as being “impact” craters. Consider for instance the Moon, if indeed the craters on the Moon were impact craters they would show evidence of skid marks caused by meteoric movement made after impact, there would also exist, on the lunar surface, proof of overwhelming meteoritic activity in the form of meteorite material, such evidence does not exist, the impact theory includes the pulverization of all meteorites and their ultimate complete disappearance.
Read More

Without exception every lunar crater has uniform cross angles, for this to be caused by meteoritic impact every meteorite would have had to rain down on your Moon from every conceivable angle and strike your Moon at right angles to the surface (while bypassing Earth who remains unscathed by a torrential rain of meteorites which should have struck her before bouncing off her surface and striking your Moon). Lunar, (and many other), craters are caused by gaseous emission.

The boiling, blistering, core is ejected and conditions below “freezing” cause the blisters ( or gas bubbles) to burst and settle into craters. The lunar surface exhibits lava seas and gaseous craters in keeping with what would be expected of the surface of an ejected core.

Hellas Basin is also referred to as “the sand dune crater” because the floor of Hellas is heaped into sand dunes in the form of a sea floor. The floor of Hellas is the deepest point on Mars and, as it is known here on Earth, wind cannot prevail at such depths, so one of the questions of your scientist is how did the dunes form.

They formed through the presence of water, far from being an empty basin, Hellas is the deepest point of an ocean, however, water on Mars being less dense than your atmosphere, the water in Hellas Ocean falls outside of your density spectrum and is not detectable by your instruments which are manufactured out of materials far denser than the density spectrum of Mars.

The fact is, we don’t perceive it. It is there, but we have no perception of it because it is outside of our density spectrum, just as we do not perceive sound, which lies, outside of our sound spectrum.  The same applies to vegetation on Mars, it is there but it is outside of our density spectrum.  We could walk through a river on Mars, we could walk around on the floor of Hellas Basin, water is to us less dense than our atmosphere and we are unable to perceive it.  We could walk through a jungle on Mars passing trees and prehistoric creatures without being aware of their presence because they lie outside of our range of densities.  We could pass right through a tree, we could pass right through the walls of a cave where occupants dine noisely, we would be unaware of them and they would be equally unaware of us.

Nature, in all its stages of growth, unfolds just beyond the field of human perception.

There is nothing to fear in Nature

The agency of Change is on the cusp of acting again, for our great betterment.  You will be told the Giant slumbering at the center of the Earth is about to wake up and life as you know it is about to end.  That much is true, but there is nothing to fear because a new far better life will begin.

Behold, I shew you a mystery; We shall not all sleep, but we shall all be changed, In a moment, in the twinkling of an eye, at the last trump:
for the trumpet shall sound, and the dead shall be raised incorruptible, and we shall be changed.